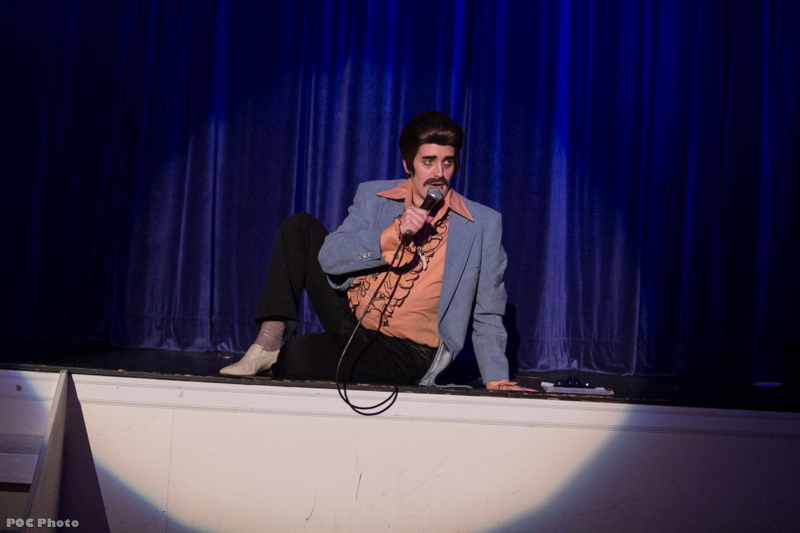 Today our Academy interview team sat down with Elsa/ Ernie Von Schmaltz to talk about what it’s like being a women who plays both a male and a female character onstage.

AOB: Do you consider Ernie a Boylesque character? A drag character? What’s the difference between them?

EVS: Yes, I consider him to be both those things. I think there are differences but there’s also a lot of overlap. The differences I see are traditionally drag kings don’t strip and do lip sync. Traditionally Boylesque is the opposite. I strip, do not lip sync, but I also sing and also MC. And I’m also one of very small handful of women in the nation regularly performing a male character who stays male. So if you want to discuss a category, I would choose Boylesque. But I don’t really care about categories a whole lot because there’s so much cross over and so many similar possibilities between the two genres.

AOB: Do you prepare for playing Elsa and Ernie differently (other than the obvious costume and makeup differences)?

EVS: Not really, no. I rehearse physical gesturing and mannerisms for the characters. If I’m speaking or singing, I will warm up my voice. I try to physically embody each character, so that’s my rehearsal. We look different but ultimately I’m preparing the same body to do two different things.

AOB: How would you describe “masculine” vs. “feminine” movement on stage? Do you make a clear distinction between them?

EVS: I think of feminine gestures as being more fluid than masculine ones. The hands create a pretty shape, the body positions accentuate curves. I think about pinup styles and posing when I’m doing feminine movement. Masculine is broader, more perpendicular planes of movement, less curve more edge. Physically taking up more space with the limbs.

But here’s the thing about a character onstage. If I did a “masculine movement” but was dressed as Elsa, I would still consider that feminine. Because we’re in a visual art form and people make a judgment on gender based on what they see, not necessary movement. Movement seals the deal, but visual is how we start. The primary characteristics that audiences base their opinion on ‘what gender is this person’ is based on things like hair, makeup, attire. And you can have both and play with gender in interesting ways by moving in a way the audience wouldn’t expect based on the visual you’re giving them.

AOB: What advice do you have for women interested in creating male or masculine personas in burlesque?

EVS: Do it! Do some research, look at who else is doing what in your area. Go to shows! Shows that feature women who present as men are not as plentiful, so go see the closest thing you can find. If you can’t find the exact thing, go watch drag queen and absorb the idea of cross gendered performance. Go see boylesque. There’s a thousand shades of gender doing performance. Make a person. Go get a wig, put on facial hair, stuff your pants, do what feels right.

Try something to help you decide who your character is. It might be a one-off thing where you try it and it’s not right, or it might turn into your calling, or drive some other agenda in your life. But try it out and see what happens!