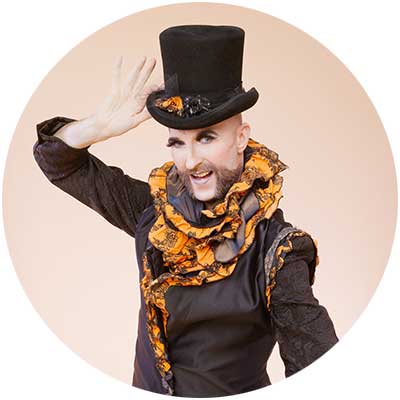 Waxie Moon has headlined burlesque festivals in Austria, Finland, Canada, Texas, New York, and Washington State. They have been seen at numerous venues throughout Seattle including Key Arena, On The Boards, The Triple Door, The Seattle Rep, ACT Theatre and The Moore Theater. Performance highlights include competing in the “best boylesque” category at The Burlesque Hall of Fame in Las Vegas, being featured in Land of the Sweets, A Burlesque Nutcracker and performing in and choreographing House of Thee Unholy #2, 3, 4 and 5. They are featured in the documentary films Waxie Moon (directed by Wes Hurley, I Ate My Eye Films) and A Wink and a Smile (directed by Deirdre Timmons, Golden Echo Films). They have taught and lectured about burlesque worldwide, and currently teach the brilliant students at Cornish College for The Arts. In 2010 they were nominated for a Gregory Award for Excellence in Theater in Washington State. They are also featured in a giant mural in Seattle’s historic Pike Place Market.

Waxie is available for private lessons and consultations.