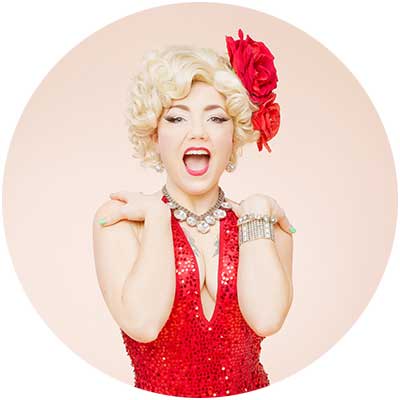 Connect with Ruby via her Social Platforms below!

Ruby was born and raised in Hawaii, and brought up on Hula, Ballet, and Gymnastics. Ruby moved to Seattle in 2006, where she quickly got recruited by the ‘International Super-troupe’, The Atomic Bombshells.

Ruby became a primary instructor at Miss Indigo Blue’s Academy of Burlesque in 2007; teaching Burlesque Bump & Grind, Tassel Twirling, and The Art of the Tease, and Burlesque 101 to people of all shapes and sizes. She has taught classes at BurlyCon, up and down the West Coast, Vancouver B.C., London and Paris.

Her unique mix of athleticism, dance, theatrics, and bubbly charm makes Ruby a Seattle treasure and beloved all over the world. She has been a highlighted performer in France, England, Portugal, Canada, China, and Australia.

Most recently, Ruby has been the creator and producer of Seattle’s BurlesKaraoke; an immersive, interactive, and fully improvisational event where ‘you sing, and they tease’. Bringing award winning international burlesque performers from around the globe to ‘take it off’ while the audience sings! Peep the BurlesKaraoke IG page to get notice of the next event!

Ruby dances with cowboy band Brent Amaker & the Rodeo, and also shimmies on countless rock and roll stages throughout Seattle, the West Coast, and festivals including SXSW. She has worked with Grammy award winning artists Macklemore & Ryan Lewis and The Seattle Opera. Ruby is a featured dancer in Ben De La Creme’s Holiday show, now streaming on HULU.