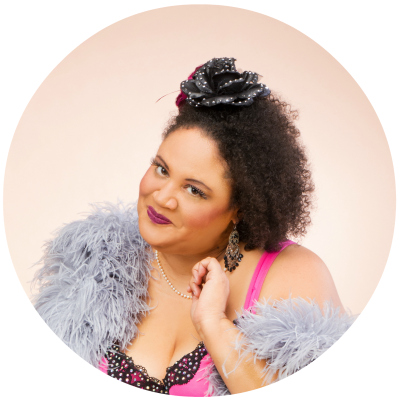 Social Media Maven/Actor/Emcee Rebecca Mmm Davis has been emceeing and hosting events since her 8th grade talent show. She’s emceed quite a variety of events:  MoPop’s Myth and Magic Event, the Fussy Cloud Puppet Slam, and The Academy Of Burlesque’s Faculty Showcases to name a few. Emcee’ing has taken her up and down the West Coast and Canada, as well as to the Edinburgh Fringe Festival in Scotland. She has been lucky to host a plethora of nerdlesque shows, including: Jojo Stiletto’s Guardians of the Galaxy at Emerald City Comic Con, and Behind the Blue Door (based on Doctor Who).

In the World of Social Media, Rebecca writes and curates images not only for the Academy, but also for KNine Couture, Haute Under the Collar, and her own production company, The Stay Up Late Show.

In her spare time (when not acting on stages in Seattle), Rebecca volunteers at Geek Girl Con and Burlycon.