“Burlesque 101 allowed me an opportunity to find me again.”

“I took Burlesque 101 three years ago and it completely changed my life.

And that is kind of a hokey thing to say, but it really did. I am the mother of a child with special needs, and it gave me this opportunity to really get in touch with myself, and the things that bring me pleasure and bring me joy: movement and dance and being creative.

The wit of burlesque, as well as the tease and denial and these different concepts and ideas, really allowed me an opportunity to find ME again. The “Me” that’s not just someone’s mother but “Me.”  Me the person.

And I think that’s pretty great.” 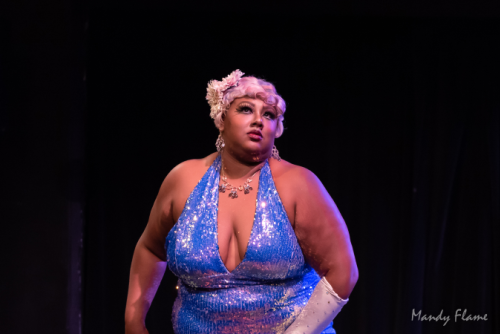 Known as the Director of Junk in da Trunk, the Michelle Obama of Burlesque, Seattle’s Own Mxtress of Dirty Glam and ‘“The They Them Yas Queen of Burlesque”, Mx. Pucks A’Plenty is a roguish radical always ready to ride the stage. Spreading their black queer magic where ever they go, Pucks is always in control. They are a lover of leather, tall boots, floggers, riding crops and all things bad & bawdy. As a plus size queer femme of color and a vocal member of the kink scene, Pucks knows their politics, body, and sex are always potent and radical.

Pucks has a dance background in jazz and ballet. Pucks took to dancing as soon as they could walk with their song of choice being Push It by Salt n Pepa at the age of two! They use their musicality and stage presence to grab hold of an audience and leave them on their knees wanting more. A graduate of Miss Indigo Blue’s Academy of Burlesque 101 and 202, Pucks works stages all over Seattle and has guest performed for Rock Candy Burlesque and Mischief: A Melanted Variety Show in Olympia, Washington. They were also featured in The Body Political in San Francisco, California in 2019.

Pucks is currently the Creatrix of Puckductions Presents, a production company based in Seattle, WA.  Pucks’ Website