Mitzy Sixx is a graduate of the Academy of Burlesque who took a chance by trying Burlesque. She experienced major transformation and more confidence!

How would you describe yourself before you started burlesque?

Pretty darn sheltered (even in my 30s). 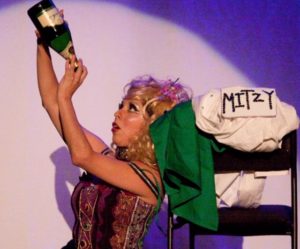 How did you hear about Academy of Burlesque?

I participated regularly in Bacon Strip. Iva Handfull and Waxie Moon had been in the shows at certain points, and one day at brunch Sylvia O’Stayformore just flat out asked me “Why don’t you get into burlesque?” It just so happened that Shanghai Pearl was joining the brunch later, and Sylvia said I should pick her brain about it. I did, and she suggested enrolling in Burlesque 101 just for kicks. If it was something I ended up enjoying, great! If not, well, at least I tried it out and I knew for myself.

What was it that you found intriguing?

The creativity when some performers stripped out of their costumes was cool. Also, I liked the fact that people could be goofy yet sexy at the same time.

What were your fears?

I was afraid that maybe this was yet another route of artistic expression that would once again refuse me. I was at the tail end of my modern dance career and I couldn’t handle more rejection. That was my lack of confidence, basically.

What was it that made you decide to do it in spite of those fears?

Again, at least I tried it. I had to find out for myself. 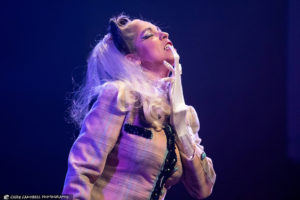 How long did you think about it before you took the plunge?

Not very long, maybe a couple of months. I had to wait that long because the next round of classes didn’t happen until then.

What was it like learning through Academy of Burlesque?

It was a lot more laid back than I thought it would be. Very supportive, and I think that was ultimately what led me back to Academy of Burlesque for the 202 class. That was a  support I had never experienced.

What about the recital? What was it like for you performing?

I remember still not being too confident about my body until we did the dress rehearsal. Some students forgot their pasties and just stripped topless (just for the class). That made me think, “If they’re performing with nothing to lose, who am I? What am I trying to preserve?”

I only invited people I knew wouldn’t take pictures (people do because they’re excited for their friends, I get it), and people that I know I could still look in the eye if my pasties popped! I remember liking performing.

What’s the most powerful transformation that has happened in your life as a result of burlesque?

Weeeeeeeeeell, I met this guy after his Burlesque 202 recital. I just had to meet him because his performance to “Miserable” by Lit was so F*****G spot on to how I was feeling about love, and I just had to tell him. That was Eddie Van Glam. Fast forward 7 years and we are married with a child (we refer to him as Baby Van Glam). That was kinda huge. 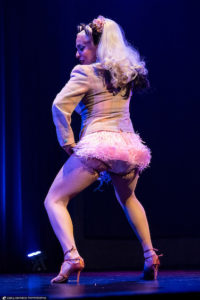 How did your experience of your body, sexuality, and femininity shift?

I realized femininity doesn’t mean “weak”. I realized it’s ok if I want to dress sexy, and tell jerks to F off because I’m not doing it for them. I did go through a spell there where I cried about my body, but I realized it was because I was trying to please a producer with standards I was never going to fit, so I stopped associating with them.

What were you suffering from that burlesque healed?

Any advice for people who may be on the fence about learning burlesque?

Think of it as a bucket list item. If you like it and decide to pursue it, great! If not, at least you know that about yourself.

Coming back after pregnancy has been a challenge. However, I remind myself that it isn’t always going to be this way. My first year back I did one show when I was three months postpartum. I was pumping backstage, still dealing with massive hormonal changes to my skin, attitude, hair, shoe size, all the stuff they don’t go over in your “child preparedness” classes. And it occurred to me: I didn’t need to be a super mom. If I don’t do many shows, people will still remember me. 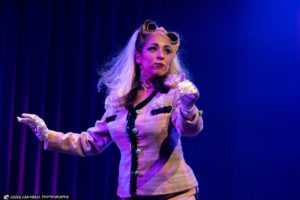 So don’t worry if you can’t make every show, even as an audience member. Keep in contact, drop a “good luck” message to other performers because it still means a lot, but please don’t beat yourself up because you can’t juggle it all. It’s a major transition, and burlesque will always be there to go back to. Take your time, come back healthy (mentally and physically), and show off those tiger stripes wherever they may appear.