Amara Strutt came to the Academy of Burlesque in 2015 seeking a creative outlet.  Although she had an extensive background in dance, Amara had stepped away from her artistic side and settled into a comfortable routine as a bartender, while making dog collars on the side. 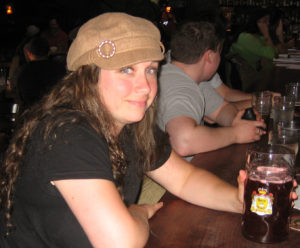 How would you have described yourself before you started burlesque?

I had a self-deprecating sense of humor. I wasn’t shy, but mostly hid behind a lot of clothes. I’d dress up once a year and get really excited about it. Most of the time I was silly and would do silly dances, but in kind of an apologetic way.

How did you find out about the Academy of Burlesque?

I watched A Wink and a Smile [the documentary film about The Academy of Burlesque]. I don’t know how I didn’t know about burlesque before! I also saw the documentary about Crazy Horse in Paris, And I was obsessed with it.

I have a background in dance and was a choreographer in college. I thought, “Oh my gosh, I didn’t know this existed. This is what I’ve been looking for, but I didn’t know I was looking for it.”

What was it about burlesque that was so striking and different than other types of dance you’ve done before?

It really hit me while watching the Crazy Horse documentary. It focused on images, beautiful shapes and the dancer’s body in a way other dances don’t. And then through A Wink and a Smile I started learning more… so much of it isn’t choreographed— it’s your own act and your own personality and your own experience that you’re showcasing. Other types of dance are about the choreographer’s experience, and the dancers are the tools.

Did you have any hesitations or fears about trying burlesque?

I had a lot of body image issues. I was hesitant about doing it for a couple of reasons, but body image was a big thing. I used to be a dancer but then 20 years passed and I didn’t have a dancer’s body any more.

I thought “I’m supposed to be a certain way because I grew up as a dancer. I’m supposed to be that and I’m not that any more and I’m sorry and I’m hiding.” I used to have nightmares about someone putting me in a leotard and putting me out on stage when I wasn’t ready for it.

And it was a big investment.  I didn’t know if I was worth that investment. I was thinking, “It’s just this silly thing I want to do and I’m obsessed with it and it looks really beautiful and interesting but…I’m not worth that.”

What got me over the hurdle was a class with Indigo. I was so struck in that class. It was Beginning Bump & Grind, teaching people to dance who had never danced before. That’s really hard.

She was so patient and so good at breaking down the movement, making it fun, and engaging with the students. There was such an honesty there. And in just that one-hour experience I knew I could trust her, and I could trust this. I told myself, “Just do it. Your 40th birthday is coming up. This is your birthday present. It’s a little extravagant… but I’m going to do this for myself.”

Now, looking back, I think, “It doesn’t matter if you have this big milestone. You’re worth that investment.” It’s like that nice bottle of wine you’ve been saving for a special occasion. It’s not doing anyone any good just sitting there on the shelf!

When you were in 101, what was that learning process like for you?

I was so excited and so overwhelmed. I didn’t really know what to expect. I signed up a couple months before the class. I started figuring out what my routine was going to be, choreographing it, designing my costume in my head and picking out the music and doing all those things. And then I went to the first class and realized, “Oh, I don’t know anything. All these things I had planned, throw them away and start fresh.” 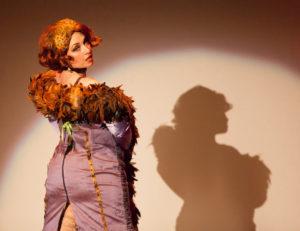 I completely changed my approach and opened up to learning a completely different thing, and it opened me up to go in a direction I never would have gone.

I remember before that class I dressed up. My “dress up” then was a western plaid shirt and Frye boots and my “nice” jeans. Looking back, it was SO not a celebration of me. It was not me at all. I just didn’t want to stand out.

What does dressing up look like for you now?

It’s ridiculous (in the best way). If it’s really dressy, I wear these ridiculous gowns and fur coats and boas and gloves. And then if it’s medium dressy I have a bunch of pin-up dresses and my wear my hair up with a flower in it, and heels.

Do you think any of that had to do with a shift in body image? What did you notice around your body image when you started doing burlesque?

I was always apologizing for what I wasn’t. But nobody knows me from 20 years ago. It’s okay. You don’t have to be perfect. There is no perfect. There’s a range of bodies and they’re all sexy. Seeing burlesque performed made me go, “Wait, look at all these different bodies. And these performers are all in their own bodies, and celebrating their bodies.” And there’s such a range of bodies in the class! Everyone was scared, but everyone stepped up and did it. Once you’re in a room and see all those bodies, you relax. We’re not all models in a magazine, and we don’t need to be.

What else did you take with you into your daily life, that started in the studio?

Confidence, for sure. Suddenly I wasn’t apologizing for myself or hiding. I never wanted to draw attention to myself or try to be the center of anything. And suddenly I was like, “Wait, it’s okay. This is who I am.” All of these things I had been quiet about, all of the sudden I was proud of.

My understanding of who I am changed a lot.

Would you have ever expected that?

Not at all. I thought I was going to have this opportunity to get up and show off. None of my friends, and not even my husband, had ever seen me dance. I just thought I’d get all my friends to come to it. They’d say, “Wow, we didn’t know you could do that! And we saw your boobs! Cool!” and then that would be done and I would go back to my life.

It was the beginning of finding community, and finding my tribe. They’re accepting, and creative, and sexy. I didn’t expect to find any of that. It was a huge transformation.

Tell us a little about how you continued and what you’re doing now.

After my last 101 class I asked Indigo, “How do I keep doing this?” She gave me a couple of suggestions so I started taking any class that was available. I was a sponge. 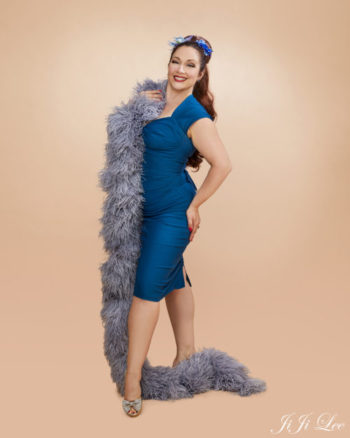 There were 2 students who helped out with our 101 recitals, and they saw my act and hired me for one of their shows. There’s a thing called Tassel Talk where you can bring an act in progress and get peer reviewed. I went to every one of them, and started speaking up and giving feedback. People were wondering, “Who are you and why are you talking to us?” I was there about six months before I actually did an act, and then people said, “Oh! You’re actually pretty good! You actually know what you’re talking about!”

A year later I signed up for the next level of classes (202), and after that Indigo asked me to join the staff of the Academy. That really changed everything.

Now I’m actually teaching at the Academy. I performed at the Burlesque Hall of Fame recently which was a huge honor, and this summer I started doing costume commissions. My life has completely changed!